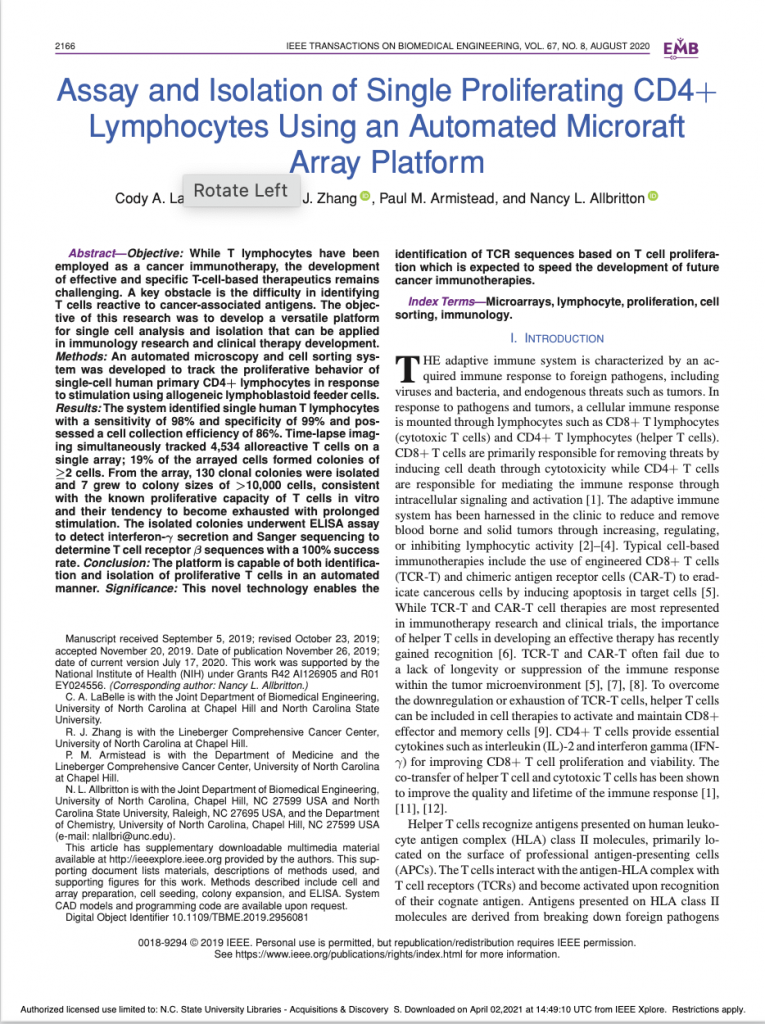 While T lymphocytes have been employed as a cancer immunotherapy, the development of effective and specific T-cell-based therapeutics remains challenging. A key obstacle is the difficulty in identifying T cells reactive to cancer-associated antigens. The objective of this research was to develop a versatile platform for single cell analysis and isolation that can be applied in immunology research and clinical therapy development. Methods: An automated microscopy and cell sorting system was developed to track the proliferative behavior of single-cell human primary CD4+ lymphocytes in response to stimulation using allogeneic lymphoblastoid feeder cells. Results: The system identified single human T lymphocytes with a sensitivity of 98% and specificity of 99% and possessed a cell collection efficiency of 86%. Time-lapse imaging simultaneously tracked 4,534 alloreactive T cells on a single array; 19% of the arrayed cells formed colonies of ≥2 cells. From the array, 130 clonal colonies were isolated and 7 grew to colony sizes of >10,000 cells, consistent with the known proliferative capacity of T cells in vitro and their tendency to become exhausted with prolonged stimulation. The isolated colonies underwent ELISA assay to detect interferon-γ secretion and Sanger sequencing to determine T cell receptor β sequences with a 100% success rate. Conclusion: The platform is capable of both identification and isolation of proliferative T cells in an automated manner. Significance: This novel technology enables the identification of TCR sequences based on T cell proliferation which is expected to speed the development of future cancer immunotherapies. 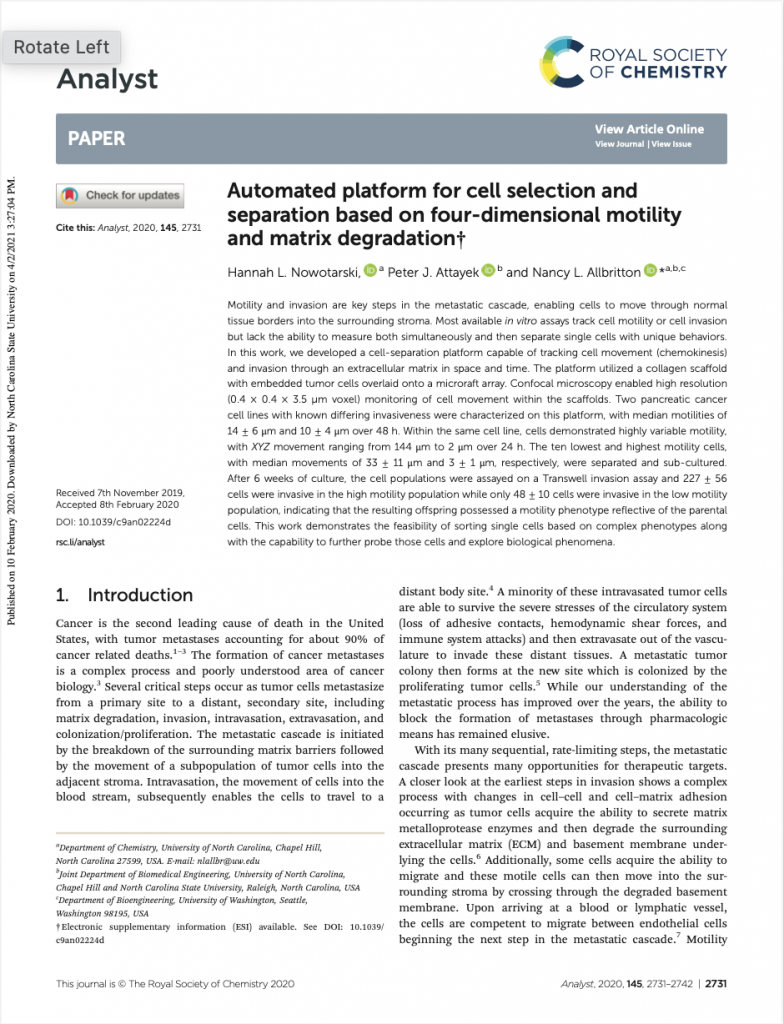 Motility and invasion are key steps in the metastatic cascade, enabling cells to move through normal tissue borders into the surrounding stroma. Most available in vitro assays track cell motility or cell invasion but lack the ability to measure both simultaneously and then separate single cells with unique behaviors. In this work, we developed a cell-separation platform capable of tracking cell movement (chemokinesis) and invasion through an extracellular matrix in space and time. The platform utilized a collagen scaffold with embedded tumor cells overlaid onto a microraft array. Confocal microscopy enabled high resolution (0.4 × 0.4 × 3.5 µm voxel) monitoring of cell movement within the scaffolds. Two pancreatic cancer cell lines with known differing invasiveness were characterized on this platform, with median motilities of 14 ± 6 μm and 10 ± 4 μm over 48 h. Within the same cell line, cells demonstrated highly variable motility, with XYZ movement ranging from 144 μm to 2 μm over 24 h. The ten lowest and highest motility cells, with median movements of 33 ± 11 μm and 3 ± 1 μm, respectively, were separated and sub-cultured. After 6 weeks of culture, the cell populations were assayed on a Transwell invasion assay and 227 ± 56 cells were invasive in the high motility population while only 48 ± 10 cells were invasive in the low motility population, indicating that the resulting offspring possessed a motility phenotype reflective of the parental cells. This work demonstrates the feasibility of sorting single cells based on complex phenotypes along with the capability to further probe those cells and explore biological phenomena. 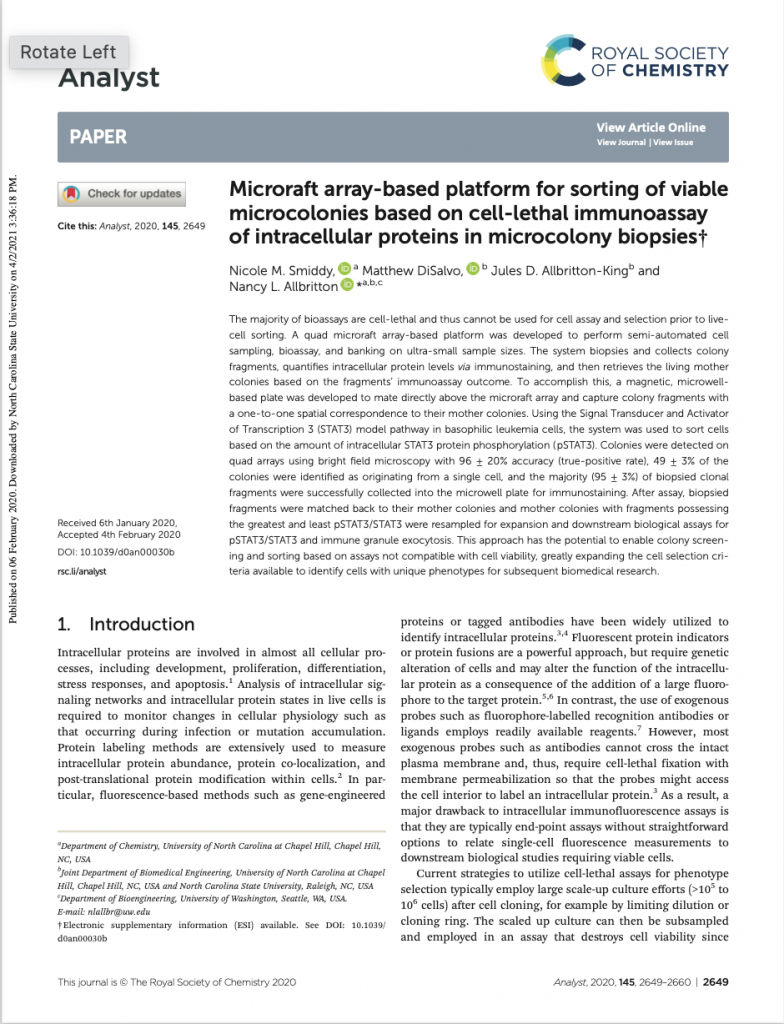 The majority of bioassays are cell-lethal and thus cannot be used for cell assay and selection prior to live-cell sorting. A quad microraft array-based platform was developed to perform semi-automated cell sampling, bioassay, and banking on ultra-small sample sizes. The system biopsies and collects colony fragments, quantifies intracellular protein levels via immunostaining, and then retrieves the living mother colonies based on the fragments’ immunoassay outcome. To accomplish this, a magnetic, microwell-based plate was developed to mate directly above the microraft array and capture colony fragments with a one-to-one spatial correspondence to their mother colonies. Using the Signal Transducer and Activator of Transcription 3 (STAT3) model pathway in basophilic leukemia cells, the system was used to sort cells based on the amount of intracellular STAT3 protein phosphorylation (pSTAT3). Colonies were detected on quad arrays using bright field microscopy with 96 ± 20% accuracy (true-positive rate), 49 ± 3% of the colonies were identified as originating from a single cell, and the majority (95 ± 3%) of biopsied clonal fragments were successfully collected into the microwell plate for immunostaining. After assay, biopsied fragments were matched back to their mother colonies and mother colonies with fragments possessing the greatest and least pSTAT3/STAT3 were resampled for expansion and downstream biological assays for pSTAT3/STAT3 and immune granule exocytosis. This approach has the potential to enable colony screening and sorting based on assays not compatible with cell viability, greatly expanding the cell selection criteria available to identify cells with unique phenotypes for subsequent biomedical research. 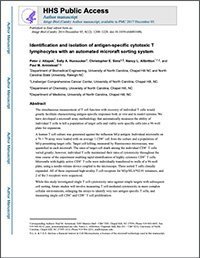 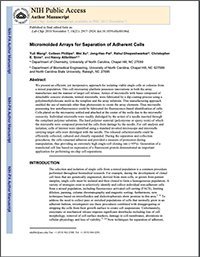 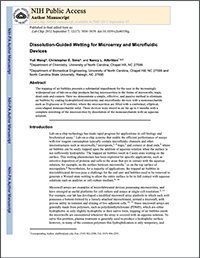 The widespread use of lab-on-a-chip devices containing microcavities in the form of microwells, traps, dead ends, and corners, is often precluded by the trapping of air bubbles. Allbritton and colleagues present a straightforward and simple approach to mitigating bubble formation that can be applied to the CytoSort™ Arrays that are the cornerstone of the CellRaft® Technology. Air bubbles are eliminated in a two-step process, whereby microarrays are first hydrophilized by plasma treatment, and subsequently coated with a monosaccharide such as D-glucose or D-sorbitol. Following this treatment, microwell arrays can be stored for as long as 6 months in air, and complete rewetting of the microwells is demonstrated by the dissolution of the monosaccharide with an aqueous solution.

Selection and isolation of single cells from a mixed population is a common procedure, for example, during the development of clonal cell lines that are genetically engineered, derived from stem cells, or grown from patient samples, single cells must be isolated and then cloned to form a homogeneous population. While myriad methods exist, they commonly rely on enzymatic or mechanical release, which imposes drawbacks in terms of loss of cell morphology, removal of cell surface markers, damage to cell membranes, alterations in cellular physiology, and loss of viability. In this seminal work describing the CellRaft® Technology, the authors demonstrate the fabrication of a microwell array that possesses detachable concave elements, termed CellRafts®, using a PDMS mold combined with standard dip-coating procedures. The resulting microarrays have low auto-fluorescence and are easily removable, in a targeted fashion, allowing for isolation and clonal expansion of single cells. Furthermore, the CytoSort™ Arrays allow for the assessment of cells based on morphology in a time-resolved manner and can be tailored to workflows requiring few to hundreds of thousands of cells. 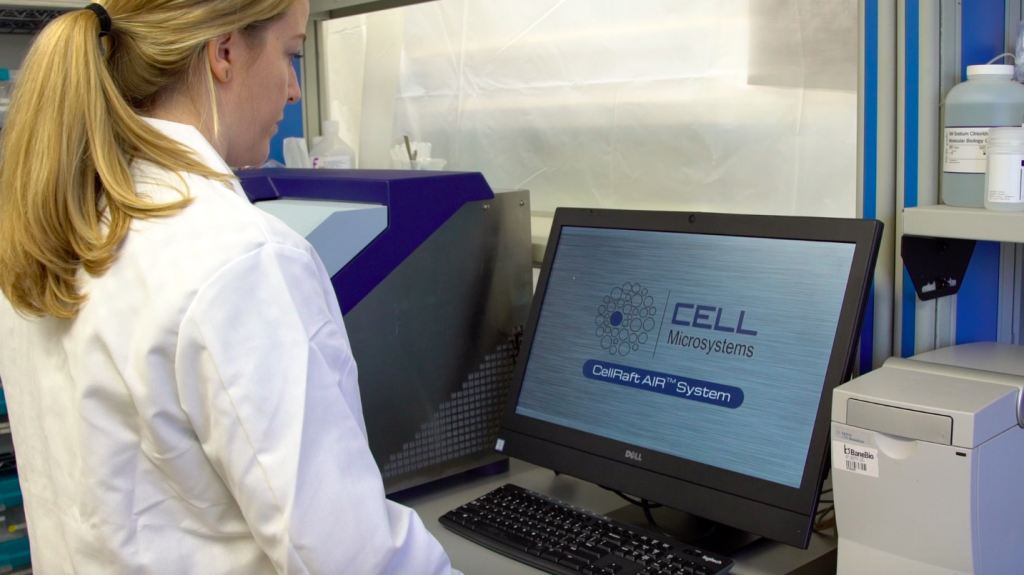